The Netflix hit returns for a second season

Surviving Summer (10 x 25’), the hugely successful Australian drama that has become a global hit for Netflix, returns for another season. Produced by Werner Film Productions and ZDF Studios, who is also the international distributor, season 2 will see the cast return to the iconic beaches of the Great Ocean Road in Victoria (Wadawurrung Country), Australia for another 8 episodes.

Sky Katz (Raven’s Home) stars in the lead role as Summer, a NY teen rebel expelled from school and exiled to Australia who makes waves among a young surfer’s inner circle - and leaves a mess in her wake. Starring alongside her is Brazilian actor Joao Gabriel Marinho (Malhacao), Australia’s Kai Lewins (Wild Boys) and Savannah La Rain (Content). Also in the cast is Lilliana Bowrey, a five-time Queensland junior state surf champion, making her first foray into acting.

Following the drama’s premiere on Netflix in June 2022 in Australia, it became the streamer’s 9th most popular TV series in the country. Further afield, it was one of Netflix’s top 10 English speaking shows globally, a hit in over 42 countries achieving 20 million plus views. A TikTok sensation as well, #survivingsummer amassed over 52.4m views on the platform.

Que Minh Luu, Director of Content, ANZ: “We're absolutely stoked that Surviving Summer made waves both here at home and around the world, and are proud to be bringing this brilliant Aussie teen series back to Netflix for a second season. Bringing the creative team at Werner Productions and our wonderful young cast back together again is a thrill, and we can't wait to share the next chapter of this quintessentially Australian story with the world.”

Joanna Werner, Producer of Surviving Summer: “The response from fans around the world was overwhelming as audiences fell in love with Summer, Ari, Marlon, Bodhi and Poppy and their adventures both in and out of the surf! We are thrilled to be bringing our amazing cast and crew back together for Season 2 and can’t wait to be back filming all along the Great Ocean Road. Here’s hoping we get some epic surf!!”

Katharina Pietzsch, Director Junior ZDF Studios, said: “Our long-standing partnerships with both Joanna Werner and Netflix have resulted in this fantastic series which rapidly became a huge success all over the world. The combination of engaging storylines, stunning locations and a superb young cast that includes top surfing talent, attracted a young, social media savvy audience which quickly expanded around the globe.”

Surviving Summer was created by Josh Mapleston (Ready For This, Beat Bugs, Dance Academy) and Joanna Werner, head of the three-time Emmy-nominated Werner Film Production company whose credits include Dance Academy, The Newsreader and Riot. A ZDF Studios and Werner Film Production co-pro, the drama series is also supported by Film Victoria and was developed with the assistance of Screen NSW. 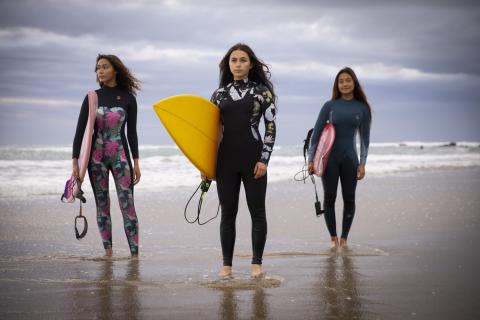