Frank Doelger in the lead as Showrunner and Executive Producer

The world of Concordia, created by Mike Walden (The Frankenstein Chronicles, U Want Me 2 Kill Him) and Nicholas Racz (The Burial Society, The Real Thing), is powered by an AI to ensure a freer, fairer, and more humane society. As the community approaches its twentieth anniversary, cities around the world are lined up to replicate its success, when the secret behind its creation threatens to destroy everything its creators have achieved.

Starring in the lead roles are International Emmy-winner Christiane Paul (Counterpart, In July) as Juliane, the visionary behind the new utopia; Steven Sowah (For Jojo, Before We Grow Old ), who plays her son Noah, the ambassador and in charge of expanding the experiment; Ruth Bradley (Ted Lasso, Humans) takes on the role of Thea, an external investigator, who joins up with Isabelle, played by Nanna Blondell (Black Widow, House of the Dragon), to uncover secrets which led to the utopia’s creation. Kento Nakajima (Detective Novice, She was Pretty), one of Japan’s top actors, stars as A.J., the 27-year-old Japanese wunderkind and head of the AI system that is the beating heart of Concordia. Jonas Nay (Line of Separation, Deutschland 83) joins the cast as Moritz, a senior operator of the anti-surveillance group called ‘The Faceless’ and one of the main antagonists of the project. Also starring are Ahd Kamel (Collateral, Honour), Hugo Becker (Baron Noir, Leonardo), and Joséphine Jobert (Death in Paradise, Summer Crush).

Frank Doelger says: “Throughout history, blueprints for the reimagining of society along religious, political, economic, and environmental lines have been put forward – particularly in periods marked by a sense of tumult, cultural and financial dislocation, and a rise in violence, like our own. The visionaries behind Concordia think they finally have the technology to realize such a brave new world, only to discover that there is no way to keep evil out as it comes from the inside.”

Director Barbara Eder adds: “I’m very excited to be part of a project that has such thought-provoking and increasingly pertinent subject matter. The exploration of surveillance, privacy, and data is the backdrop for this chilling thriller. Concordia merges both, technology and its abuses, and also how it shapes the hierarchy of society. It is fantastic to be working with such a talented cast and crew in bringing this story to life.”

Concordia is supported by Mitteldeutsche Medienförderung, Sächsische Staatskanzlei, and Medienboard Berlin-Brandenburg and is jointly distributed by ZDF Studios and Beta Film. The series is Intaglio Film’s latest production following the eight-part eco-thriller The Swarm, an international co-production with ndFI, ZDF, France Télévisions, RAI, ORF, SRF, the Viaplay Group, and Hulu Japan. The Swarm is currently in post-production.

Intaglio Films GmbH is a production joint venture between Beta Film and ZDF Studios. The company, headquartered in Berlin, develops, finances and produces scripted English language drama aimed at both the national and global market. Intaglio is headed by multi Emmy® Award winning producer Frank Doelger (Executive Producer on HBO’s Game of Thrones, John Adams, and Rome). Beta Film and ZDF Studios are supporting the company with their expertise in the field of international co-production and distribution.

ZDF Studios was originally founded in 1993 as ‘ZDF Enterprises’, a private subsidiary of ZDF, one of the largest and most renowned television broadcasters in Europe. The company was renamed ‘ZDF Studios’ on 1 April 2022. Based in Mainz, the business is responsible for distributing programmes worldwide, implementing international co-productions, acquiring licenses and merchandising key brands under its own name, for ZDF and for third parties. Successfully established as an independent market player in Germany and globally, it operates as part of a strong network of 30 direct and indirect subsidiaries and affiliates. ZDF Studios has the largest German-language programme stock in the world, plus a constantly growing catalogue of international productions consisting of series and mini-series, television films, documentaries and children’s programmes. By continually evolving, the ZDF Studios group has been able to open up numerous business areas in the television and media sector. As a result, ZDF Studios now provides a comprehensive full-service offer and covers every stage in the creation and exploitation chain of successful TV productions in all genres, from developing content to producing, licensing, marketing, merchandising, online rights and much more.

Owned by Jan Mojto since 2004, Beta Group produces, finances and distributes high-end entertainment content for the global market. It draws on both long-standing and new relationships spanning public and private broadcasters, streaming platforms and special interest channels, production companies, theatrical and video distributors, and organizers of major film and TV festivals. The group partners with and holds stakes in European production companies for fiction and non-fiction as well as special interest channels. Founded in 1959 by Leo Kirch, Beta Film is based in Munich, Germany with offices in the US, Latin America, and throughout Europe. 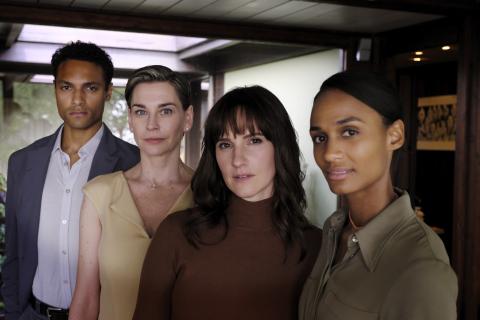