ZDF Studios is pleased to announce it is the global distributor (ex Austria) for the format of Servus TV’s hugely popular Quiz Hunt, produced by Interspot Film. The daily game show, which launched in 2019 on the Austrian channel owned by Red Bull Media House GmbH, has been so successful that its ratings have quadrupled since the launch.

Occupying a 5pm slot and with 450 episodes under its belt, Quiz Hunt has achieved average ratings of 7.9% this current year. Not only is it a hit with viewers, it also has a spillover effect with the next show on Servus TV’s schedule benefiting from its success.

Quiz Hunt is a life size board game where the people are the tokens and in order to move forward the two contestants, one being the winner from the previous round, have to answer questions correctly. They compete and chase each other over a spiral consisting of 50 fields. Whoever reaches the top field first is the winner, takes home a cash prize, and is allowed to compete against new challengers in the next rounds until he is defeated. Tactical variations allow the duel to tilt in any direction at any time and ensure suspense right up to the last second!

Quiz Hunt’s biggest winner to date? A student who pocketed 375,000 euros after appearing in 47 shows where he faced 77 opponents and answered 1,649 questions correctly.

Ralf Rueckauer, Vice President Unscripted, ZDF Studios, said: “The simple and clear game principles of the game show, coupled with the thrill of the chase, makes "Quiz Hunt" so captivating. The format impresses with the simple, yet effective visual concept of the spiral. "Quiz Hunt” is THE ideal format for every afternoon or access prime slot on any channel worldwide.”

Interspot Film is one of Austria’s leading production companies in the fields of film, television, documentary, entertainment and shows. The company was founded in 1969 and is now a 360-degree production and media institution with its own studios and a wide variety of facilities located in Vienna. Interspot is a second-generation family business. 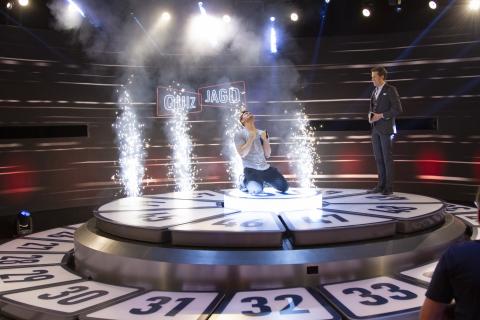