Channel 4 has recommissioned five-part crime thriller, Before We Die, starring Lesley Sharp, Vincent Regan and Patrick Gibson. The series is produced by Eagle Eye Drama in association with Caviar and is supported by the Belgian tax shelter via Caviar Film Financing. PBS Distribution holds the North American rights and ZDF Enterprises will distribute the series worldwide, in addition to season one.

Lesley Sharp (Scott & Bailey, Three Girls) returns to head up the cast as detective Hannah Laing, who joins forces with maverick detective Billy Murdoch, played by Vincent Regan (Troy, 300) in a desperate bid to protect her son Christian, played by Patrick Gibson (The OA, Guerrilla).  Season two will not follow the same storyline of the original Swedish series, but will see Hannah pitched directly against Dubravka, played by Kazia Pelka (World's End, Casualty) the matriarch at the head of the Mimica Croatian crime family.

Channel 4 Head of Drama Caroline Hollick, who commissioned the series, says: “I’m delighted to welcome back this gripping crime thriller to the channel. Series one struck a chord with audiences, with over 12 million viewers tuned into the show on All 4 - from the edge of their seats. I can’t wait for audiences to enter back into this world - with more surprises, twists and turns in store and I’m delighted to have Lesley Sharp back at the helm playing the formidable Hannah Laing, along with the rest of our brilliant cast.”

Lesley Sharp who plays Hannah Laing adds: “To take part in a story that has a complex, ambivalent, older female character at the centre of its beating heart is a privilege. I am excited and honoured to be part of this collaborative, creative team. Viva Hannah! Viva Channel4! Viva Eagle Eye! Here’s to the next chapter of Before We Die.”

Jo McGrath, Executive Producer and CCO of Eagle Eye Drama, commented: “Before We Die proved to be an irresistible boxset sensation for UK audiences and the second season will return with more fast paced action sequences and plenty more dramatic plot twists. So very rarely at the centre of crime thrillers, women this time round will be pulling all the strings, leading to a breath-taking climax to the series.”

Before We Die series one has had over 12m All 4 views to date and was the sixth biggest first run title on All 4 last year. Season one will launch in the US on PBS on Sunday, March 20, 10:00 – 11:00 p.m. ET (check local listings) on PBS and will be available to stream on the PBS Masterpiece Prime Video Channel. It also can be streamed concurrent with broadcast on all station-branded PBS platforms, including PBS.org and the PBS Video app, available on iOS, Android, Roku streaming devices, Apple TV, Android TV, Amazon Fire TV, Samsung Smart TV, Chromecast and VIZIO.

Commissioned by Channel 4 Head of Drama Caroline Hollick and Commissioning Editor Gwawr Lloyd, the second series will be directed by Carolina Giammetta (The Drowning, Hollington Drive), written by Mark Evans (That Mitchell and Webb Look) and will be filmed in Bristol and Belgium this year with Jo McGrath and Walter Iuzzolino as Executive Producers.

Eagle Eye Drama was formed by Walter Iuzzolino, Jo McGrath and Jason Thorp, the same three founders and creative team behind the global drama company Walter Presents. The company produces dramas and animations, based on adaptations and original ideas. Channel 4 has a minority stake in the company invested through the growth fund.

PBS Distribution offers consumers and educators the highest quality factual, scripted, and children’s programming including films from Ken Burns, hit series from MASTERPIECE and foreign language dramas from Walter Presents, entertaining and educational PBS KIDS series, and award-winning documentaries from NOVA, FRONTLINE, AMERICAN MASTERS, NATURE, AMERICAN EXPERIENCE, and many independent producers. For over 10 years, the company has extended the reach of programming beyond broadcast while generating revenue for the public television system, stations, and producers. 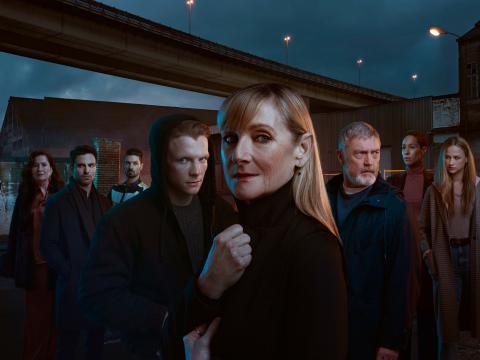