The Swarm chronicles the struggle of humankind against an unknown enemy demonstrating swarm intelligence that lives in the depths of the sea. When the reckless treatment of the oceans threatens the natural habitat of this mysterious collective, it strikes back. In a very short time, all human life is at stake – and the fate of the entire population of the world rests in the hands of a small group of scientists.

The scripts are written by Steven Lally (Strike Back), Marissa Lestrade (Deep State), as well as Chris Lunt and Michael A. Walker (Young Wallander, Devils). The series’ scientific advisors are polar and deep-sea researcher Prof. Dr. Antje Boetius of the Alfred-Wegener-Institute Helmholtz-Centre for Polar and Marine Research in Bremerhaven, Germany and Dr. Jon Copley, Associate Professor of Ocean Exploration at the University of Southampton, United Kingdom.

The Swarm was produced according to guidelines of the initiative “100 Green Productions” by MFG Medien- und Filmgesellschaft Baden-Württemberg GmbH and in compliance with the German Film & TV Sustainability Regulations, and has been shot primarily in regions of Italy, among others in Lazio, Veneto, and Puglia, as well as in one of the world’s most advanced water tank facility in Brussels (Belgium).

Intaglio Films GmbH is a production joint venture between Beta Film and ZDF Studios, lead by its managing directors Dr. Jan Wünschmann and Robert Franke. The company, headquartered in Berlin, develops, finances, and produces scripted English language drama aimed at both the national and global market. Intaglio is creatively headed by multiple Emmy® Award-winning producer Frank Doelger (Executive Producer on HBO’s Game of Thrones, John Adams, and Rome). Beta Film and ZDF Studios are supporting the company with their expertise in the field of international co-production and distribution. 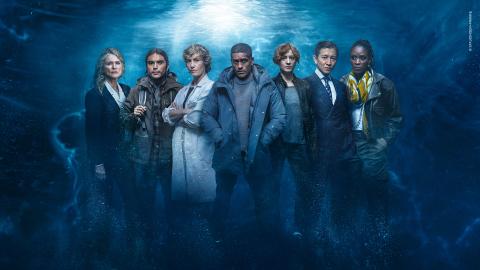